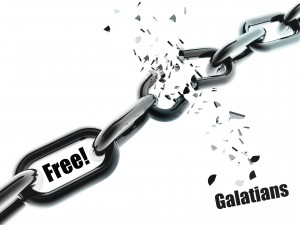 It seems like a massive contradiction.  The world tends to see Christians as living under religious bondage, restricted from everything that is fun.  The Bible speaks of Christianity as true freedom.  Which is it?

On Sunday I revisited Galatians and preached an overview of the whole book.  Paul had preached the gospel and seen lives transformed – spiritually dead people brought to life by the glorious gospel, churches planted made up of communities of captured hearts enjoying Christ and enlivened by the Spirit.  They were free – free from the bondage of sin and death, free from the deceitful lies of self-love, free from focusing on themselves to give themselves away.

But after Paul and Barnabas had been through town, they were followed by some more serious “christian” teachers.  These teachers wanted the Galatian believers to take God a bit more seriously.  After all, God’s people had always been a people defined and guided by God’s law.  This Paul with his newfangled gospel-lite was missing the fullness of all God intended.  Under Paul’s preaching the Galatians were born a bit, but not fully born again.  Under Paul’s version of Christianity what hope would they have of living a proper Christian life – they needed the guidance of the Law!

So as soon as Paul heard about this, he wrote his letter.  His strongest letter.  His least polite letter.  His powerful bombshell of a letter that sits in our Bibles ready to explode in our lives like a spiritual fireworks display!

I’m struck every time I read Galatians how unlike us Paul was – that is, he didn’t respond with a balanced view!  There is no, “okay, the Law is a bit good, but best be in balance about this!”  As far as Paul was concerned, there can be no balancing truth with error, no balancing freedom with bondage, no balancing gospel with another gospel.  A little leaven leavens the whole lump.

So Paul pushed back.  He pushed back against the accusation that he was a mini-apostle, and that he was preaching a half-gospel.  He set out to show in no uncertain terms that we cannot be justified by keeping the Law and we cannot live the Christian life by trying to keep the Law.  There is the law/flesh/effort version of Christianity, and the result of that approach is enslavement, bondage, not to mention lovelessness, biting and devouring, and various other potential fruit.

On the other hand there is the gospel.  This is the fundamental reality of life with God.  It preceded the temporary Law.  It was always about faith, not effort.  It was always about faith in God’s promised seed, about looking to Christ not to self.  And now in this era of the New Covenant, it involved the fullness of the Spirit’s indwelling, causing us to cry Abba! from the heart and living life as it was intended to be.  So what is the result of the Christ-focused/Spirit-indwelling/New Covenant version of Christianity?  Freedom, love, joy, peace, patience, serving, caring, lifting, carrying, giving, and more.

So which version of Christianity do we present to a watching world?  Some of us, if we are honest, do present something less than freedom in Christ.  We may use the language, but it looks like an attempt to  sanctify stuffiness with biblical rhetoric.  It can be scary to let go of the law/flesh/effort version of religion that we’ve grown up with, or grown to love.  It is hard to imagine that a turn from focusing on morality can lead to anything but immorality, we are convinced that turning from virtue must be a turn toward vice.  If that is where we are, we have to let Galatians explode in our hearts.  The Law was given to show us our need, to show us our failure!

It takes real faith to turn from self-focused effort to Christ and to the work of the indwelling Spirit.  It takes faith to trust the New Covenant – it has to, there is no other way.  But to fail to trust the New Covenant is not to opt for option B in God’s menu.  It is to turn from the One who called us and to turn to another gospel which is no gospel at all.  It is to choose bondage and a yoke of slavery over the freedom for which Christ has set us free!

(Please see our Resources page for our series of sermons through Galatians.)