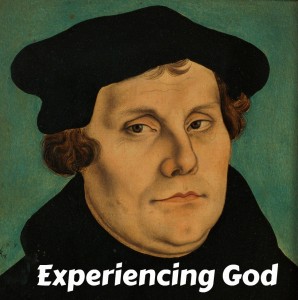 The stir for this entry comes from Martin Luther.  What caught my attention is a revisit to Tuomo Mannermaa’s intriguing work, Christ Present in Faith: Luther’s View of Justification (Fortress, 2005).  Luther, according to Mannermaa, held that a believer’s experience of Christ in saving union is crucial to faith.

The reason for mentioning this is that most Lutherans today—those who embrace the Formula of Concord—treat the believer’s legal standing with Christ as primary and his indwelling as a follow-up benefit.  As such a believer’s justification is distinct from union with Christ, and union is treated as a benefit of faith and salvation.

But Mannermaa, a Lutheran scholar, views this arrangement as “alien to the Reformer” (p.41).  The nature of righteousness is, instead, a matter of the soul being transformed by Christ’s presence so that Christ’s union and the soul’s justification is the same event.  The shift away from Luther’s view, Mannermaa suggests, was Philip Melanchthon’s work.

I would add that this dismissed Luther’s immediate and experiential faith in favor of a more rational and disaffected arrangement.  Luther’s view was derived from the biblical language of marital union in which Christ’s initiative is the defining event of salvation: the divine lover comes and wins his beloved’s heart and that inaugurates faith as a response.

What follows from this pursuit and response?  Let’s turn to Luther’s own words in “The Freedom of a Christian” (1520—taken from his Three Treatises, 286-87).

“The third incomparable benefit of faith is that it unites the soul with Christ as a bride is united with her bridegroom.  By this mystery, as the Apostle teaches, Christ and the soul become one flesh [Eph. 5:31-32].  And if they are one flesh and there is between them a true marriage—indeed the most perfect of all marriages, since human marriages are but poor examples of this one true marriage—it follows that everything they have they hold in common, the good as well as the evil.”

This last feature—the common possession of good and evil—was critical in Luther’s use of the divine-human marital exchange to explain the ontology of justification in Bible terms.  Every other feature of salvation flows out of this exchange.  We return to Luther:

“Accordingly the believing soul can boast of and glory in whatever Christ has as though it were its own.  Let us compare these and we shall see inestimable benefits.  Christ is full of grace, life, and salvation.  The soul is full of sins, death, and damnation.  Now let faith come between them and sins, death, and damnation will be Christ’s, while grace, life, and salvation will be the soul’s; for if Christ is a bridegroom, he must take upon himself the things which are his bride’s and bestow upon her the things that are his.”

The clarity and simplicity of this understanding overturns the layers of legal and metaphysical conjurings that grew out of medieval scholasticism—most of which were put in place for the sake of non-biblical premises.  These included the idea that God’s radical difference-in-being as Creator from the creation—incommensurability—precludes such a union.  There was also a belief taken from Aristotle’s Nicomachean Ethics (who merely articulated human common sense) that God requires humans to be free moral agents who play some role in achieving salvation.  Both notions are reasonable but biblically wrong-headed.

What Luther had experienced in his own conversion and found anchored in the Bible is that any and every moment of human salvation reveals God’s Heart moving the human heart to respond.  How?  By the work of Christ’s wooing Holy Spirit who pours out God’s love in that person’s heart.

When we turn to the Bible to measure Luther’s view that faith is our experience of and response to God’s love we find support in every direction.  In the Old Testament the marital motif is common—usually with God’s heart being broken accompanied by his promise to restore a bond of love—as in Isaiah 53-54, Jeremiah 31, Ezekiel 16, all of Hosea, and more.  In the New Testament Luther’s key passages of 1 Corinthians 6 and Ephesians 5 make sense of the final wedding supper of the Lamb in Revelation.

This, in turn, sets up an expectation that faith involves the ongoing experience of God’s love—what Paul presumes in Romans 8—with intimate features such as the Spirit’s witness that we are now free to call the Father “Abba”.  There is also Jesus’ celebration in John 17 of his love for the Father that he intends to be the shared experience of all true believers.

What, then, of claims by many notable Christian scholars that faith is a disaffected and will-based effort by grace-enabled souls?

A good question!  It reflects, in part, another marriage: of Aristotle’s philosophy to Christianity, which Thomas Aquinas facilitated.  It may also reflect the rationalisations by professing Christians who are still resisting the Spirit’s wooing call—as in Paul’s kicking against the “goads” of Christ before his Damascus road conversion.  Real faith always works through love—a real love as is found in sound, affectively rich marriages.

Luther and his kin, of course, must not be accused of promoting a spiritual tautology—the experience of experience—as if mere experience is a proper ambition.  The only source of proper Christian experience is Christ himself, and to know him in a Heart-to-heart bond is to love him.

If any readers haven’t experienced this love I invite you to pray for eyes to see him and for ears to hear his gracious voice: “For God so loved the world, that he gave his only Son, that whoever believes in him should not perish but have eternal life.”  If you do pray, be assured—as in John 3—that Christ’s Spirit will have been stirring you already and his newfound presence that follows will feel like a breeze stirring the once still forest of your soul.

Pray and see for yourself.