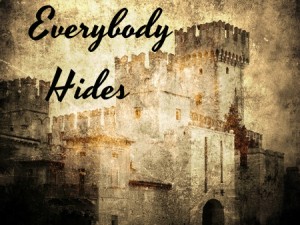 Psalm 46 is always a highly valued text in times of war.  Which is probably why, for a while now, we haven’t heard too much about it.  Maybe we should?

In the past the news of an impending threat would come in the form of a breathless messenger coming from the next town.  Today we live with constant video access to every corner of the planet.  The net effect of this constant stream of information tends to be that we carry on with our own lives while getting drawn into non-news and entertainment, but with true news having little effect on us.  But every now and then the news does get our attention.

If we are looking beyond what the mainstream media chooses to highlight, there are some very disturbing things going on.  And when the news is genuinely disturbing, perhaps it is time to break out Psalm 46 again.

Overview of the Psalm – The Psalm falls nicely into three stanzas, each marked with a contemplative Selah to give us pause for thought.  The first stanza begins with a launching idea that is then picked up in a refrain finishing the second and third stanza.  As far as Psalms go, this one is clear and simple.

It begins with the big thought that God is our refuge and strength, an always accessible help in troubling times.  Consequently, we will not fear.  Then the writer lists a set of natural disasters that would rock anyone’s world – earthquake, mountains moving, raging seas, etc.  I don’t think he is pondering natural disasters, so much as describing a hypothetical upheaval of all that seems stable.  Even if the whole created order were to return to utter chaos, we will not fear.  This must mean that the nature and character of God is more trustworthy than even the solidity of the mountains and the boundaries of the seas.  Selah.

With the first three verses laying the foundational thought, the writer then becomes overt about the threat of war.  He describes the tranquility of the city of God where He is reigning and present.  And just as our hearts calm to ponder what it will be like to finally live with God, suddenly verse 6 stirs us with the news that all around the nations are going crazy like a raging sea and slipping mountains!  The hypothetical collapse of creation stability is the experienced reality when it comes to the geo-political changes in the world.  But, immediately our perspective is checked with the realization that one word from God and the whole planet could be melted.  Therefore, we do not fear.

The refrain is beautiful: The LORD of hosts is with us, the God of Jacob is our fortress.  The LORD is the God who makes promises and keeps them – He cares about continuing to care for us.  He is strong – He is the God of angel armies.  If you have ever watched a well-drilled group of soldiers march past, it is intimidating.  Even a relatively small number.  Now imagine an angel, the kind that could kill 185,000 human soldiers in one night.  Imagine two.  Ten.  One hundred.  Imagine a number so big you could not count it, and that is the army of heaven, and our God leads that army, and He is with us.  Therefore He is our fortress and we run to hide in Him.  Selah.

The final stanza offers an invitation to come and look at what God has done, and implicitly, to anticipate what He will do.  He ends wars that seem overwhelmingly threatening.  He topples powerful foes that seem to strong to resist.  And finally in verse 10, God instructs the raging armies and belligerent power-hungry rulers to stop!  Stand still.  Be quiet.  Hush.  And know that He is God.  He will be exalted by all.

The perspective shift is powerful.  The raging nations and growing armies and plotting terrorists and geo-political upheavals are all very small compared to the utterance of our God.  He is the God of angel armies and He is with us.  He is our fortress and we run to hide in Him.  Selah.

When the threat really rises, everybody hides.  The question is, where do we hide?

Hiding Option 1 – The only good option is to run into the most powerful player in current history.  If it is clear who will win in the end, why not join them?  We know the end of the story, but often it is hard to not fear when the circumstances feel so grave.  Often it is hard to not fear when God doesn’t seem to offer immediate deliverance to everyone who is suffering for being His.  What if I have to face more than discomfort for my faith?  What if my life is threatened, is He still a fortress?  Think back to three men in Iraq two and a half millennia ago.  Our God is able to deliver us, but even if he doesn’t in the moment of this particular trial, we won’t bow to your statue.  Were they foolhardy?  Or were they gripped with the greater reality that the all-powerful God of angel armies was with them, so that even in death, they had confidence that they would be with Him?

Hiding Option 2 – The most pervasive option around us today is often known as “hiding our heads in the sand.”  It is pretending there isn’t a threat.  I recently visited Auschwitz and was sickened to think that people could somehow be oblivious to the hideous evil of that place.  If only they had had social media and smartphones, then everyone would have known.  Actually, don’t people still hide from things today?  The media seem so committed to diverting attention – whether it be spinning a story, or shifting from genocide to Hollywood, the media are experts at making the potentially best informed of all time into a number and dumber generation.  But we can’t simply blame the media.  We can do it to ourselves.  We are more than capable of hiding from reality.

There may be other reactions, but these seem to be the big two.  As the news stirs fear within me, will I distract myself with little things and pretend all is well, or will I run into my fortress – the God of angel armies, the God who has chosen to be with me?

A History of Assumptions
You want what?!