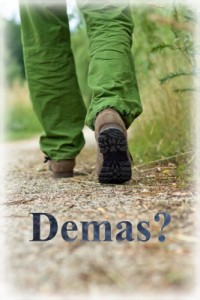 What happened to Demas?

Demas is mentioned by Paul in both Colossians and Philemon.  Along with Demas we find Aristarchus, Luke, and John Mark cited as a support team with Paul during the apostle’s house arrest in Rome.  We can guess that Demas, like the other men, was a young convert whose response to the message of Christ’s love set him apart as a potential leader in the growing church.

That promise later evaporated.  “Make every effort to come to me soon,” Paul wrote to Timothy in his final letter before martyrdom, “for Demas deserted me, since he loved the present world, and he went to Thessalonica” (2 Timothy 4:9-10).

What happened to Demas?  Why his change of heart?

Paul’s cryptic comment is all we have to work with but let’s reflect.  Did Demas originally come from Thessalonica—so his desertion was about his being homesick?  Or maybe he was frightened by Nero’s new ambition to discover, then burn or crucify believers after he blamed Christians for the burning of Rome in 64 AD?

We can only guess.  But what jumps out in Paul’s comment is the erstwhile disciple’s lost love.  We then ask, had Demas ever shared a bond of selfless devotion with Paul?  Had he ever responded to the Father’s love in Christ?  Had the Spirit’s invitation to live in the outflow of God’s love been spurned?  Or had Demas always loved the world?  Is it possible that after Paul’s death Demas eventually returned to Christ as his first love?  Or was the world always his first love?

Earlier in his letter Paul warned Timothy of the problem of those in the church who, despite having the “form of godliness” were actually “lovers of self” and “lovers of pleasure rather than lovers of God” (3:2&4).  Was this the spiritual DNA of Demas?

What we can say is that Demas fits somewhere in the spectrum Jesus set out in his parable of the soils.  Many people have at first responded to the word sown in their souls but only a limited portion of the sown seed is ultimately fruitful.  So Demas was apparently among the many whose response to the word was choked off by love for the world.

He had company.  Even Peter once stepped into a satanic role—opposing Christ’s calling to the cross—and, later, he denied Jesus three times.  Yet Peter’s love for Christ defined his ultimate trajectory and he, like Paul, later died for that love.

We can take some things away from our question about Demas.  For one, what we love most will define us.  And that love displays itself in the ways we finally invest our lives.

We can also learn from the grief we feel in Paul’s words about Demas.  Jesus felt this himself as in his words to the church in Ephesus: “But I have this against you, that you have discarded your first love” (Revelation 2:4).  We can be sure it continues for him.

So here are the twin questions Demas really raises for us: what in the world was so attractive that he abandoned an eternal life with Christ to pursue it?  And what is it about Jesus that he failed to grasp?

For Paul Christ’s love was and always will be compelling.  It’s what we were all made for.  Given the specter of Demas’ desertion let’s not settle for less than the best ourselves, even at the cost of the cross.

We Are Not Jesus’ Plus One
Getting to Know God