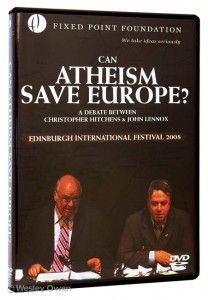 Yesterday the world heard that Christopher Hitchens had died.  He was a writer, polemicist, commentator and famous atheist. I remember watching one of his debates with John Lennox in Edinburgh (on video) a couple of years back. Following the news of his death it was interesting to see the surge of comments on twitter yesterday – including, for instance, “unspeakably sad” from Al Mohler, I think. (Although I have to note that one or two comments did seem quite disappointingly cheap.)

Hitchens was interviewed by Jeremy Paxman last year when he already had been diagnosed with cancer. Paxman asked if it might be worth taking Pascal’s wager – that is, why not be open to the possibility that there is a purpose and a God, since there is nothing to lose and everything to gain. I found Hitchens’ response interesting.  He considered this to be Pascal’s lowest point. It spoke of a very cynical God, and a rather stupid one. He noted that if God determines everything based on whether someone has made a self-motivated false profession of faith, then it is contemptible, as is the human who does it. He continued:

“If I’m surprised to find when I pass on from this vale of tears, that I’m facing a tribunal – which you notice by the way, you’re not allowed to bring a lawyer, there’s no jury, there’s no appeal, it is altogether unattractive, why people want it to be believed that their God is this way I don’t know. But suppose that I am there, maybe a one person tribunal, depending on your view of the Trinity, I would say, ‘I hope you notice that I didn’t try and curry favour, that I was honestly unable to believe in the claims made by your human spokespersons. Now do I get any understanding?’ And if that doesn’t work, well then I don’t know what would. But I’m not going to try anything servile, I’m resolved on that point.”

I have to say that I agree with Hitchens on some of his logic here. If God were so shallow that he would judge everyone by looking for a pathetic self-motivated profession of faith, sort of a passcode for a positive eternity, then that God would be contemptible indeed. The God he describes here offers no real understanding, and the whole package is altogether unattractive. However, the truth of the gospel is so much richer than that.

I am fairly confident that Hitchens knew the Christian gospel is much more attractive than he described, and that it isn’t about passcodes and selfish pretense to curry favour with an aloof, arbitrary and cynical God. Actually, I should write that I’m fairly confident he at least heard a more accurate presentation of the gospel, even though he didn’t come to know its veracity (as far as we know). Yet, it certainly served his purposes to attack a straw-man version of Christianity.

But here is my lingering concern. Attacking a straw-man version of something will only be revered by the masses if the masses believe the straw-man to be an accurate representation of reality. Let me state this more directly. Too many of us Christians are offering explanations of the gospel that are understood as a bizarre “condition” on which all is based – “just believe this possibility and say these magic words and you’ll have your ticket to a first class forever.”

The gospel is not about covering all eventualities. It is also not about selfishly using a unique passcode for a better future. It is not about getting people to “pray a prayer,” or even to simply believe certain facts. It is about the compelling truth of who God is and what He has done in sending His Son to win our hearts back to His triune love. Let’s be sure that the gospel we proclaim is a gospel centred on encounter with the love of God in the person of Christ, rather than a supposed good news shorn of its compelling relational core.

If only Hitchens had met Christ, rather than just the transaction god of ill-thought through gospel presentations. Let’s pray that we can offer Christ in all His compelling wonder, and never settle for sharing a simplified shell of the genuinely good news.

8 Responses to Christopher Hitchens Was Right