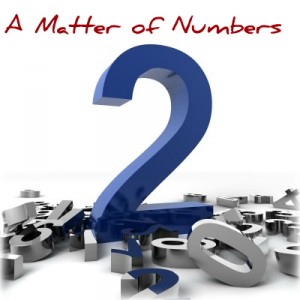 Most of us find security in numbers.  We like to be with others—to go with a crowd.  And a strong majority vote is the ultimate measure of a good democracy.  So, too, as those involved in economics or politics say before they make a key decision, “Let’s look at the numbers.”  Numbers, after all, don’t lie.

That’s all fine . . . at least until we get to the Bible.  There we find that numbers are not quite so important.  I know, of course, that God promised an immeasurable number of offspring to Abram in Genesis 15 and has met that promise since then—so the concept of numbers has weight both as a metaphor and in tracing actual quantities.  Yet God never treats quantities of people, cattle, days, or cash as something that defines his decisions.  He is just not into polling.

We see this most clearly in the Bible book of Numbers.  It’s a book that starts with a population census and ends with another census taken forty years later.  The first numbering—a list of the men fit to go to war—is 603, 550 (Numbers 1:46) and its later repetition is 601,730 (in 26:51).  The point that the text underscores is that only two men from the first census are still around by the time the second census is taken.  Just two!

And why was that the case?  I’ll let the text speak for itself:  “For the LORD had said of them, ‘They shall die in the wilderness.’  Not one of them was left, except Caleb the son of Jephunneh and Joshua the son of Nun” (26:65).

Bible readers will know the reason for this verdict.  The people had failed their faith exam: they refused to trust what God had told them and to rely on his providential care.  The main event in their failure came when the earlier generation of soldiers balked at entering the Promised Land.  They were frightened by the size of their opponents: “we seemed to ourselves as grasshoppers, and so we seemed to them” (13:33).  Joshua and Caleb, on the other hand, showed a remarkable confidence in God.  “If the LORD delights in us, he will bring us into this land and give it to us . . .” (14:8).

There it is: some people believed that God delighted in them and that was all they needed.  Two, to be exact.  And 603,547 did not.  I’m also excluding Moses who had a separate faith failure.  God, having shown grace after grace; miracle after miracle; and given promise after promise to this gang finally said, “Enough!  I’m ready to wipe out this generation!”  It was only when Moses spoke of God’s reputation among the pagans that God’s judgment was spread over a forty year period.  But no soldier who failed to trust God’s word and to follow his calling ever made it into the Promised Land.  Not even one.  Our lesson?  Numbers are not God’s measure of success.  Faith is.

As a tiny point of application this commitment to the quality of faith rather than the draw of numbers shaped our own decision to keep our Cor Deo ministry small and the focus strong.  If God is more interested in quality than in quantity, that’s where we want to operate too.  If it takes at least 20 weeks to offer a basic yet strong exposure to God’s Word in an enriched life-on-life setting, we’ll do that; and then trust God to bring us those with a faith strong enough to give up income and to forgo academic credentialing for an opportunity to seek God together with others.

It was a good decision.  We had eight participants last year—just beyond our target—and it was great.  Yet it seemed just a bit too large for the sort of heart-to-heart engagement we see in the New Testament disciples.  So this year we want to be even smaller.  Quality in ministry always trumps quantity.

In a separate measure—but still dealing with quality rather than quantity—Jesus taught about his kingdom in the Sermon on the Mount that “those who find it are few” (Matthew 7:14).  Numbers are not what matters.  A faith in the God who delights in loyal trust is what really counts.

Holy, Holy, Holy – A Unique Description?
“…And heart with strings of steel, be soft as sinews of the newborn babe…”